CNC Robotics. The Next Step in Automation Worldwide?

You’ve got a CNC machine for your production. Finally! Full automation, no human factor and high productivity 24/7. We are really sorry to say it, but no. Your journey into the world of automation has just started. And the ticket for this journey is the CNC robotics. Before describing all the benefits a robot brings to your CNC production let’s have a look at the history.

What are the CNC Machines?

Wikipedia defines CNC as a computer numerical control developed for machining. A CNC machine processes a piece of material by following a coded programmed instruction without a manual operator.

A program-driven production line surprises no one today. But the principle of CNC is pretty old, it goes back to 1804 and since then, there have been no fundamental changes to the approach.

The grandfather of the CNC machine was a Frenchman and a weaver. Joseph Marie Jacquard was the first to use a punched card to control the weavingmachine. The program was stuffed with binary code: hole on the punch card = action, no hole = no action. Thus, it was possible to automate the production of textiles with a variety of patterns. Many thanks to Mr.Jacquard. His invention allowed your grandmother to buy this monstrous jacquard armchair.

More than a hundred years later, John T. Parsons captured the Automation Banner. He came up with how to automate the production of propellers for aircraft, using the coding on metal punched cards. In the 1940s, the efficiency of metalworking and manufacturing was, to put it mildly, relevant. Later, when it turned out that the invented machine is too expensive, Parson was fired. But don’t worry - justice triumphed. It turned out that in the post-war period automation still brings huge profit. Parson's patent was acquired by such companies as IBM, Fujitsu, General Electric. The father of automation returned to the presidency chair. Automation was in the air. 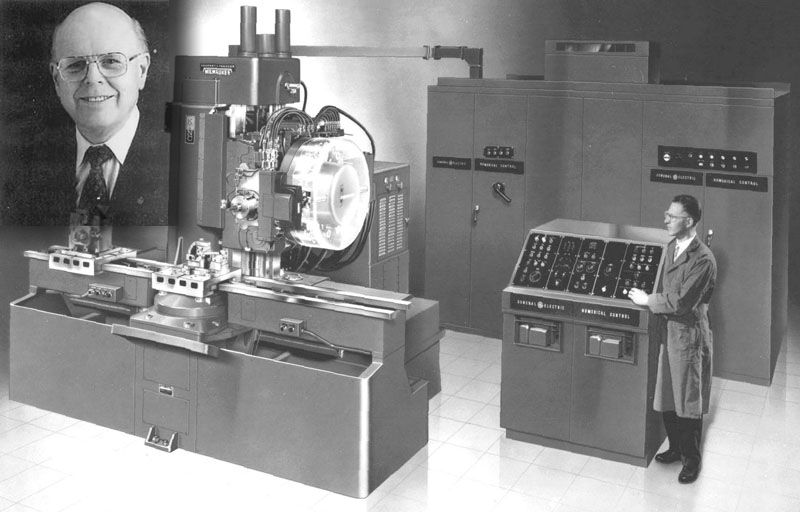 CNC machines have become the striker of the scientific and technological revolution of the 20th century. Further development of the CNC control went hand in hand with the new programming languages ​​and computing systems.

How did the CNC Machines change our world?

Are you running out of spare parts or is something broken? Today you don’t have to wait three months until the only master in the whole neighborhood carves out the necessary part. Depending on the complexity, the new part can be made in just a couple of hours. A CNC machine doesn’t need lunchtime or suffer from hangover. It just does what it was coded for, without getting tired or complaining. Top CNC machines producers are constantly looking for doping for their products. How to make it faster? More effective? Thanks to CNC machines, Amazon warehouses are always full, and you do not have to wait for your order for years.

In the good old days, the master had to spend many years learning how to produce two items that are at least similar to each other. He had to spend even more time teaching this skill to his stubborn apprentices. Before the CNC machining, no relevant quality standards existed. With the CNC machining mass production of hundred copies with microns accuracy is no longer a problem. Mr. World CNC Lathe works with an accuracy of 0.2 microns.

The pricing policy is simple. Supply is equal to or greater than demand? The price decreases. CNC machines made millions of products more affordable. Hand-made products today are a sign of elitism, like a Lamborghini Reventon or Japanese yosegi furniture.

Welding, work with metals, and cutting are always associated with high risks. Falling eyesight, bad hearing, injuries and burns. You can fix the CNC machine, but not a man. CNC machine operators face fewer risks than their predecessors. The vast majority of machines are equipped with an emergency stop button, curtain guard, soundproof casing, and guard fence.

Drilling, cutting, flattening, grinding, and welding. Everything that was once done manually and took time and health became simple and quick. Normally, a single CNC machine is suited to one task. Multitasking machines are more expensive and more difficult to maintain. Therefore, at large factories with a full production cycle, the whole streets of CNC Machines are built and each ‘house’ has its operation. A kind of CNC manufacture with a division of labor. 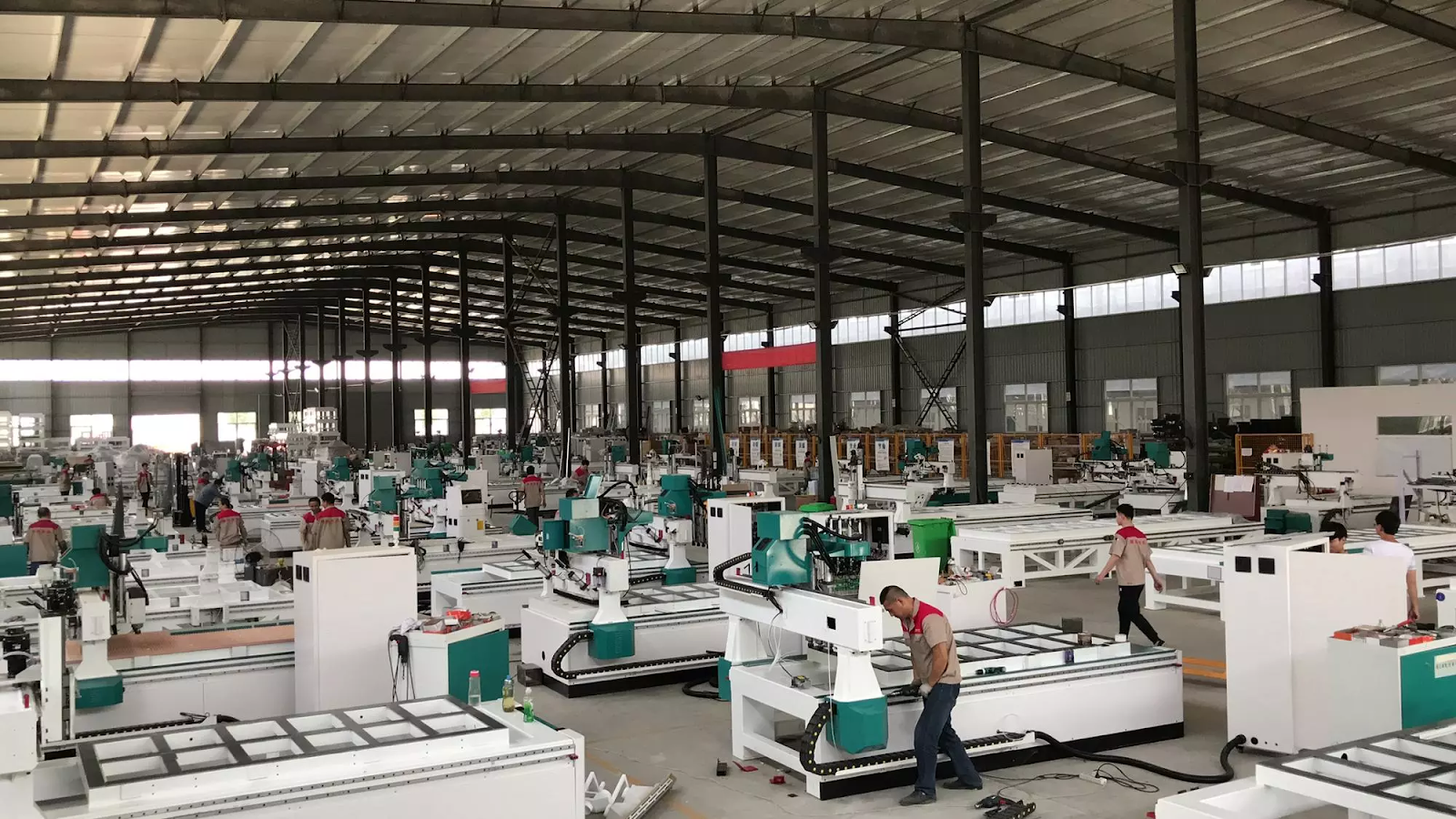 To navigate in a modern huge CNC-world, you can use several differentiation approaches from the list below.

By number of axes

CNC machines have several axes of movement: linear, rotary, andboth. The number of axes determines the complexity and accuracy of operations.

Semi-automated. Production steps are completed by the CNC machine, but some steps can be performed only by human or robot operators:

All CNC machines described above allowed the industry to be more independent, autonomous, and effective. But… Your production is still under the influence of the human factor. A CNC operator may distract, ignore safety rules, or make mistakes. But not a robot.

A robotic CNC arm can load any CNC machine. It controls the whole process and unloads the machine after it’s done. It can check the finished product and pack it. A robotic operator can even move parts from one machine to another. The core features of robots are their precision, repeatability, and flexibility. To use a robotic operator means to take all the advantages of your CNC machine.

Robotics and CNC machines were developing in parallel. Now they are often compared as concurring solutions for industrial automation. What is better, more accurate and efficient to use?

Let’s have a look at the main CNC and robotic arm features.

You don’t have to exchange your existing CNC machine with a robot, but you can upgrade it. Loading and unloading, quality control, and ready parts packaging cannot be done by a CNC. But a robotic arm can perform these actions, from loading to packaging. Don’t limit your business - use the advantages of both technologies and create an automated production cycle. A robotic arm can increase the CNC cell’s efficiency.

How does a robotic arm assist a CNC cell?

5 advantages of using a robotic arm as a CNC operator

Automated loading boosts productivity without you having to hire additional personnel. The robot works 24/7, with no pauses, sick leaves or holidays. The automated loading/unloading frees up human employees for other, more sophisticated and creative tasks, such as setting up, programming, management.

The robot is quicker than the human in some operations and slower in others. However, consistency is a key point here. The robot isn’t a sprinter, it is a high efficient marathon runner. It grabs, loads, and unloads at the same speed throughout the whole shift of its lifecycle.

The robotic loader is pre-programmed for accurate positioning on each step: grabbing the part from the loading table, loading it in the CNC machine, putting on the unloading table, etc. The robot arm reaches +/-1 mm accuracy in loading and unloading operations.

A robot can work in the environments that are hazardous to human health. Too high or too low temperatures, noisy or dusty production, the most dangerous CNC operations such as lathing or drilling – a robotic arm can be adjusted to any environment.

While the CNC machine is drilling/milling/lathing, a robotic arm can do some other operations in parallel – load the next CNC, or pack the ready product, or check its quality. The robotic arm integrated with the CNC machine can even replace tools and grippers during the manufacturing process.

What to consider while choosing a robotic loader?

The robotic arm solves the lack of specialists problem. No training or hiring wonders needed to put a robotic arm as a CNC load assistant. A CNC robot is easy to set up and to adjust to the new needs.

A brief guide to select a robot motor
Why Mini Servo Motors Are Essential for Modern Robotics?
A Servo Motor with a Controller: How the Two Fit Alongside