A Servo Motor with a Controller: How the Two Fit Alongside

Unlike a stepper motor functioning as an open-loop mechanism, a servo motor is merged with a controller and a feedback device into a closed-loop system. In the arrangement, the engine produces kinetic energy, turning its shaft to cause the driven machinery to rotate clockwise or anticlockwise.

The controller part keeps track of the movements throughout running cycles, taking care to bring the positions the actuator takes and the velocities it runs at in compliance with commanded values. To that end, the module performs the disturbance rejection function, adjusting voltage supply to obtain desired RPM and torque. 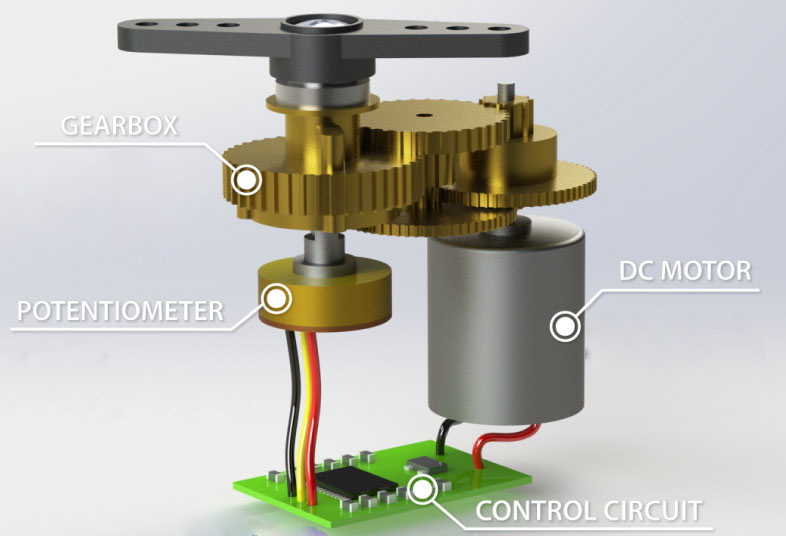 The variety of controllers

Based on complexity, it is possible to distinguish the controller triad: 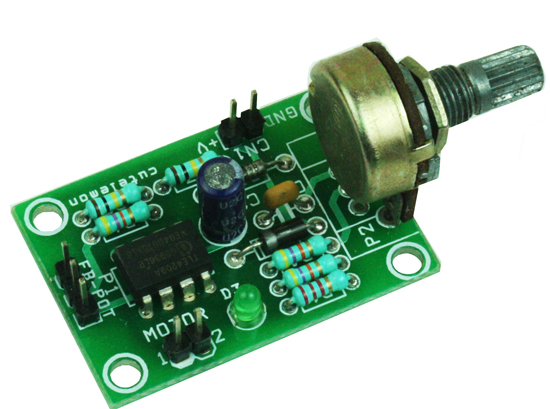 The computer-programmable controller is the type widely adopted in industry-grade servo actuators. Let us see how the device exercises its orchestrating powers.

To orchestrate angular displacements, a servo motor controller produces pulse-width modulation (PWM) wave forms, subsequently relaying the modulation signals to a motor. Each waveform is a sequence of square-wave peaks and dips with characteristics, such as minimum and maximum widths and repetition rate.

The peak corresponds to the voltage ON state, whereas the dip signifies the voltage is OFF. Therefore, the longer a PWM pulse remains ON, the more volts a motor receives, which accelerates its rotation. Typical frequency is 50 impulses a second (50 Hz), or once in 20 seconds.

The pulse width governs angular displacement of the servomechanism shaft, dictating where it should shift once it receives a specific waveform. The width-to-angle mapping varies, depending on the engine motion range and resolution. For example, a servo motor can be preset to turn to 45 degrees upon receiving a 2 ms impulse. Accordingly, a controller transmitting a 1 ms-long pulse causes a servo motor to move to an angle closer to zero, while a 3 ms-long one results in it shifting further beyond 45 degrees. Maximum and minimum limits vary as well—from manufacturer to manufacturer, from brand to brand.

The benefits of regulation based on the pulse-width modulation principle are as follows:

Tuning with the PID algorithm

Disturbance rejection in a controller means tuning servo output to match input commands and relies on the PID (proportional, integral, and derivative) algorithm. Common in closed loop circuits, the method aims at computing an error and minimizing it through conversions relying on proportional, integral, and derivative coefficients. With regard to a servo, the error is the difference between a setpoint (a commanded value) and desired duty parameter (e.g., speed, rotation angle).

The proportional coefficient is the gain defining how duty parameters correlate with the error magnitude. Augmenting the ratio speeds up system reactions. However, when the gain is excessive, motor output becomes unstable.

The integral coefficient sums up the error over a time interval. The coefficient increases even at slightest deviations, enabling correction of steady-state error, which is the ultimate difference between the setpoint and the required motion properties.

Applying the derivative coefficient leads to reduction of the feedback output in case a duty parameter changes towards higher values at a fast rate. Increasing the derivative time accelerates system response, leading to extra sensitivity to deviations. However, when feedback from a position sensor is noisy or the closed-loop circuit operates at slow rates, setting higher derivative time causes orchestration instability.

Combining a servo motor with a controller

In fact, there are two alternatives to implement the component in a servo system. Let us look into them in detail.

It is a stand-alone module, otherwise known as an amplifier. The advantage of the alternative—the user can configure the device to regulate not only engines, but also to handle other components involved in a servo-driven application. The configuration flexibility of general-purpose controllers brings added value to various industrial automation solutions, such as CNC machines, conveyor lines, etc. On the downside, servo drives require additional space and a dedicated selection process where the user has to consider a whole range of criteria. Some of them are the total quantity of servos and other system components to be managed, whether triggering should be manual or by means of an external signal, etc.

In this case, a motor controller is a printed circuit board (PCB) encapsulated into one housing with the motion hub. On the one hand, producing a solution like that entails significant research and engineering efforts. The scope of works includes creating an overall circuit layout, finding proper constituent parts, designing a PCB, as well as writing a code to interface with the board and testing the resulting solution. As a result, however, the user gets a control chip matched perfectly to the application needs and specifications of the driving engine. 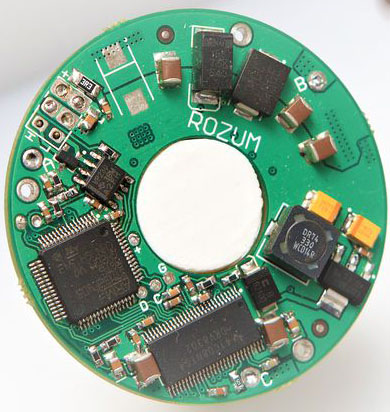 Each RDrive servo motor features an inbuilt controller of in-house design—a PCB connected to a feedback sensor PCB with a BiSS line. No need to save space to fit in a control module or to rack your brains selecting a stand-alone amplifier. Tailored to be compatible with other structural elements, the integrated smart chip generates PWM signals to drive brushless AC motors to desired rotation angles.

The RDrive controller interfaces with the components of a servomechanism (encoders, temperature transducers) to read or calculate position, speed, and torque. If necessary, it tunes motion (speed, trajectory, etc.) in accordance with setpoints from master commands by applying the PID algorithm. Featuring support of the CANOpen protocol and the Application Programming Interface, the component enables data exchange with external hardware.

Engineering High-Torque Servo Drive With Topology Optimization
Application of Servo Motor: I Was Made for Movin’ You Baby
Why Choose a Servo Motor for Applications