Robots as Coffee Makers: Evolution of the Idea

Robots as Coffee Makers: Evolution of the Idea

A robot with coffee maker features, such as a barista bot and an automated kiosk, is a recent invention, though attempts to automate making of espresso drinks have a long history. Read the article to learn interesting facts about the evolution of a brewing pot into a smart robo server.

First mention of a device for preparing javas dates back to 575 A.D. in Turkey. The Turks were reported to cook roasted beans in a small pot over the fire. The year is considered the official beginning of the coffee maker timeline, though hardly the actual point in time when the appliance appeared. 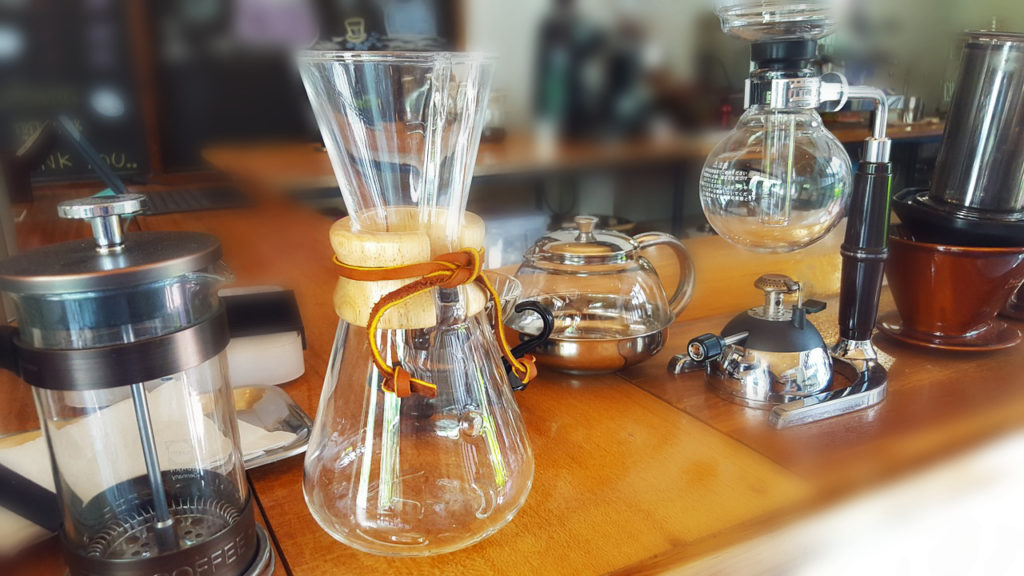 The chronicles recorded no new related inventions up to 1710 when infusion brewing was discovered in France. The French enfolded ground beans into a linen cloth and put the resulting wrap into hot water, holding it submerged for as long as required to obtain the desired beverage strength.

In 1800, a French drip pot emerged—an infusion brewer of improved design by Jean Baptiste de Belloy. The device comprises two separate sections: a container for a portion of fresh-ground beans and a vessel to collect the dripping beverage. Between the sections, a fabric filter was provided. Making joes with the drip pot involves funneling water, aboil or near 100 degrees, into the upper container and then discharging the lower vessel to fill a cup with a fresh hot brew. A shortcoming of the method is that water cools as it drips from section to section.

In 1822, Angelo Moriondo patented an Espresso machine. A functional prototype of the appliance was first demonstrated at the 1884 Turin General Exposition. In the device, hot water under high pressure is forced through ground coffee and a stainer, yielding a thick beverage with intense aroma. By setting the pressure parameter and the grinding finesse, operators of the machine can vary the gustatory qualities of the resulting potion. 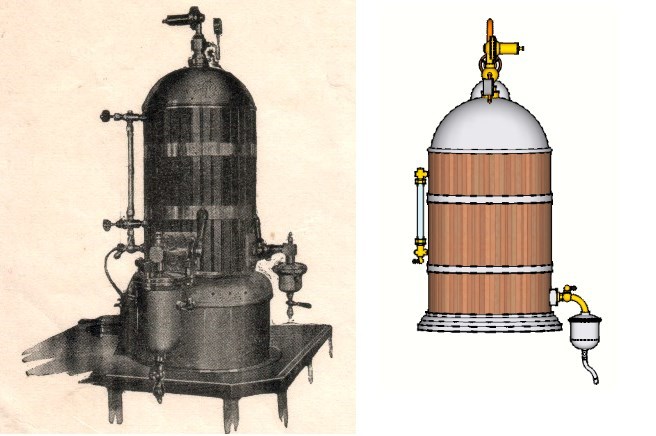 The year 1835 was a landmark for another invention—the vacuum brewing technology, authored by Loef from Berlin. The utensil has two chambers. As water is warmed to boil, the resulting steam rises into the top chamber that contains coffee beans. After heat is no longer supplied, vapors condense, pulling the drink through a filter into the base section of the device.

The last, but not the least important innovation of the nineteenth century is the percolator, engineered by Sir Benjamin Thompson in 1865. By design, the apparatus is a pot with a small water section in the bottom contacting with a thermal source. Water circulates continuously at boiling or near-boiling temperature through the coarsely-ground beans in the upper part of the devices. The circulation enables extracting substances contained in the grounds. The resulting extraction drips into the bottom section and mixes with the liquid in it until a drink of desired strength is obtained.

The last century began with the emergence of a drip coffee maker in 1908—the brainchild of Mrs. Melitta Bentz who also introduced cheap blotter strainers. From housewife experience, the inventor was familiar with nasty defects of then-existing devices. Percolators tended to overbrew, espresso machines passed grounds through into drinks, while linen filters required thorough cleaning. Attempting to make her routine duties less tiresome, Melitta experimented with a punctured brass pot and different filter materials and settled with paper from her son’s exercise book.

In 1928, a new device was offered for java amateurs—a French press. Brewing in the joepot starts with grounds and boiling water loaded into a single vessel. The next step is to leave the mixture for a while and then push down the plunger inside the device to press the residues to the bottom. The appliance is still used extensively, including as travel mugs.

The automation age for coffee-making devices started from Faema introducing a pump-operated espresso machine in 1961. The appliance was actually an improved modification of earlier forced-vapor and piston-pump models. In the 1961 version, the pumpset was powered with electricity.

With a new design, the espresso machine drew water directly from waterworks transferring it via heated tubing and through grounds. The method enabled obtaining optimum temperature, while preventing the water in the boiler from stagnating.

In 1970, an automatic drip coffee machine was invented, where water is boiled and fed automatically through grounded beans. The appliance keeps the resulting potion heated. Though the coffee-serving device was initially intended for installation at a restaurant or a bar, it spread into households. 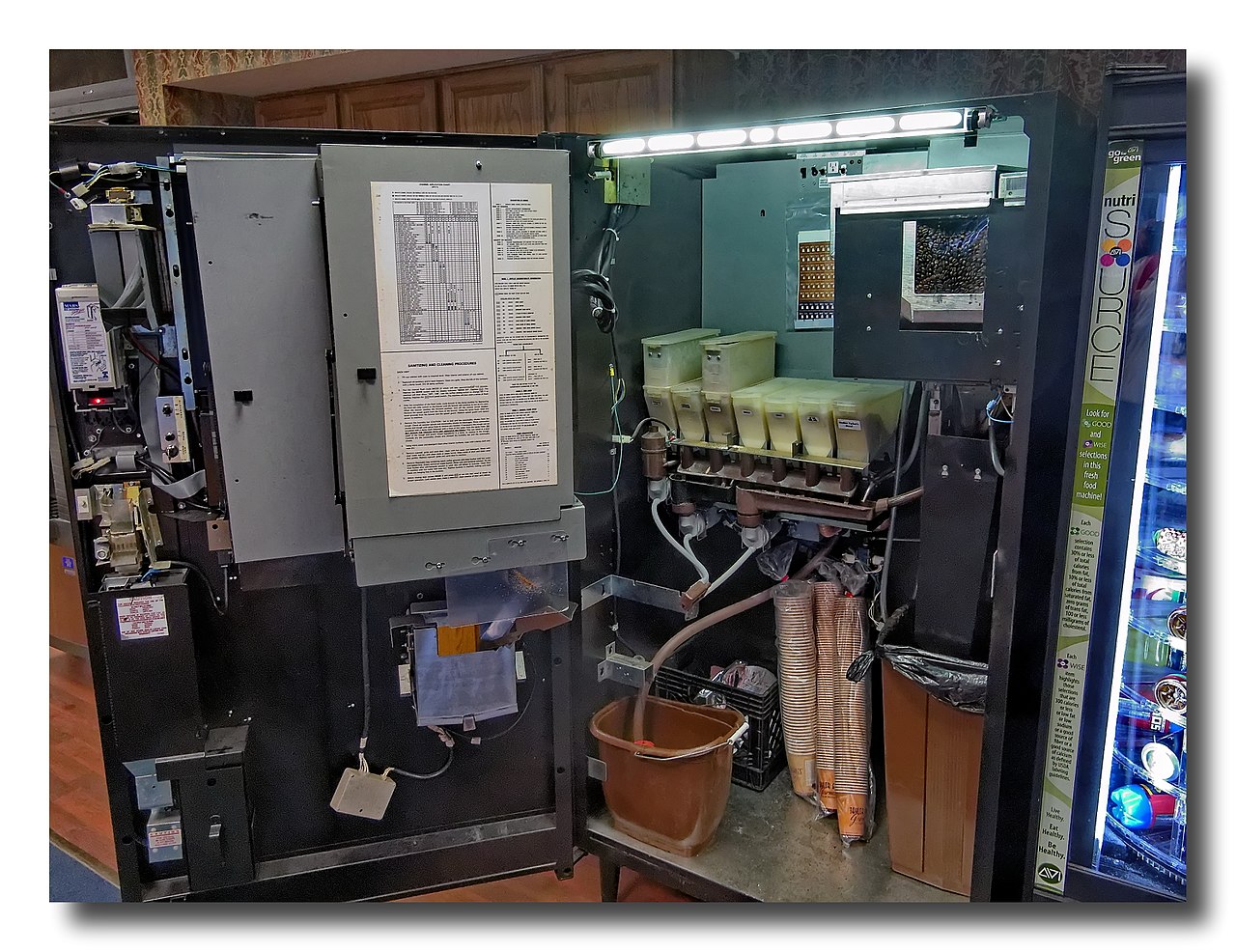 A vending automat was, perhaps, the earliest attempt to ‘dehumanize’ brewing jobs. Invented in 1947, the equipment dispenses hot drinks in the automatic mode—once a person pushes a button corresponding to a preferred beverage type. Originally, the machines used instant powder, whereas the latest models on the market run the entire cycle—from grounding beans to serving a variety of condiments, such as sugar, or cream, or milk. The menu comprises various drinks—espressos, cappuccinos, mochas, lattes, as well as hot chocolate and tea.

Robots for brewing javas is the latest technology trend working towards eliminating labor shortages and diminishing ever increasing workforce-related expenses. Unmanned cafes and bars, furnished with robotic arms or similar mechanism, are not mere dreams about the future anymore. The devices are already being tested in interaction with real people in the United States, China, and Taiwan—at stores, food outlets, cafes, etc. Major market players have already delivered prototypes of advanced robot coffee makers that are hitting the news around the globe. KUKA conceptualized the robo barista as an Industry 4.0 wonder, communicating with a cloud to receive data as required to prepare ordered beverages. ABB’s Yummi is now serving joes and entertaining shoppers at the famous Selfridges’ store. A two-handed Sawyer by Rethink Robotics—a host at Henna (“Strange”) Cafe in Tokyo—can serve multiple espresso cups at a time.

A bunch of startups appeared on the market offering robotic solutions targeted at automating the food and beverage sector.

The products are represented in the following categories:

Rozum Robotics has built an own barista bot based on the PULSE robot—available under the R/Cafe franchise. A convenient interface for interaction with customers, high-speed operation, ultra-precise motion—that’s the service package of the solution. Java blends have been carefully selected and refined by award-winning baristas to deliver a selection of espresso-based drinks, with or without milk and frothing.

To find yourselves in a futuristic settings of a robo cafe, visit Tokyo. For instance, to meet a robot waiter face-to-face, choose the Dawn ver.β cafeteria as the journey destination.

Like in the old days of vending machines, designers and producers of robot coffee makers believe the franchising scheme to work for their purposes as well. The dealership concept involves interactions between a franchisor who lends its title to a branded product and related profit to a franchisee who agrees to meet certain obligations in return.

The franchisor bears responsibility for advertising, as well as support and initial personnel training.